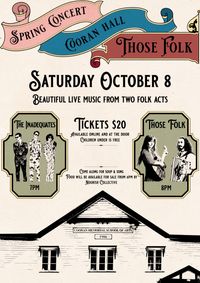 Spring Concert with Those Folk

Schedule: 6pm Doors and Dinner for Sale (Soups by Nourish Collective) 7pm The Inadequates (Break for Cakes and tea in between) 8pm Those Folk

Charismatic, authentic and thoroughly entertaining, Lawrence Menard (USA) and Clare Quinn (AUS) are the transpacific-troubadours known as ‘Those Folk.’ Having met in Scotland in 2012, they have since travelled extensively and lived in the pine forest mountains of California. They now hang their travelling hats in Pomona, Queensland. A partnership forged in the fires of folk music, Those Folk explore sounds from the 1960’s folk revival and contemporary Americana music. Breathtaking vocal harmonies are featured alongside rich instrumental work performed on guitars, accordion, mandolin and banjo. Lawrence & Clare are storytellers who make audience members feel like fast friends. As songwriters they delve into love, hope, belonging, and the human condition. As performers they enthral, enchant, and leave a lasting impression. Lawrence & Clare have been compared to the likes of Simon & Garfunkel and Angus & Julia Stone. Those Folk make not just folk music, but music for all sorts of folk.

The Inadequates are an award-winning trio known for their unusual instrumentation and innovative acoustic style. Growing rapidly within the Australian folk scene, The Inadequates have been likened to bands such as Nickel Creek, Mumford & Sons and The Lumineers. With a catalogue of original music focusing on their tight harmonies and technical skill, the boys are currently writing for their first album which they plan on releasing within the next year. Performing in their signature bright suits and featuring banjo, mandolin, guitar and accordion, The Inadequates are definitely an act you don’t want to miss.